After activating this functionality, your login data (customer number and partner number) is saved as a so called Cookie on your local file system. We recommend to use this function only if no other users are working with this computer, tablet or smartphone. In generally we suggest: Log out after your purchase.
More information about Cookies can be found in our data privacy statement

What is my customer number?

You will find your customer number on a Würth invoice, a delivery note or an order confirmation. It will be displayed on the first page, in the top right hand corner. If you do not have any of these Würth documents, please call our service hotline on +44 03300 555 444. You can reach us from Monday to Friday, 7:30 am to 5 pm (not on public holidays).

You are still not a Würth customer? You can register online in a few simple steps. Once you have successfully registered, you will have access to all prices and can then place an order. Click on "Register now".

You are not yet a Würth customer? You can register online in a few simple steps. Once you have successfully registered, you will have access to all prices and can then place an order. Click on "Register now"..

What is my partner number?

You will receive your partner number together with your login details once you have successfully registered on the Würth Online Shop via an email to the email address you specified on the registration form. Alternatively you can contact your sales representative. If you do not have this data, please call our service hotline on +44 03300 555 444.

The password must be at least 8 characters long and be composed of numbers and letters, with at least 4 different characters. Your customer number can not be used as password.

We could not find the content you are searching for.

Please check your search string or use another search term.

For bonding metal, plastic and rubber parts with and to each other in a matter of seconds. 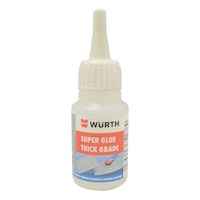 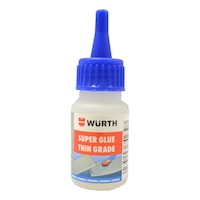 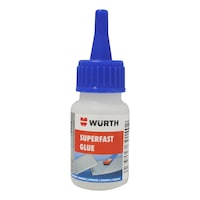 For easy and effortless work. Very easy to use one-handed. 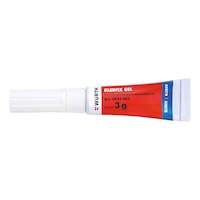 Würth offers a wide range of cyano (cyanoacrylate) adhesives to perform your assemblies in record time. As a specialist in hardware and tools for professionals, Würth has developed cyano adhesives based on the needs of its customers across multiple industries, who use Würth adhesives daily for material assembly.

Cyanoacrylate glues come from liquid chemicals. These adhesives harden instantly when compressed in contact with surfaces via a reaction with moisture. They do not consist of solvents (no shrinkage), and form a thin colourless film. They allow small repairs to be made in seconds.

SUPPORT FOR THE USE OF CYANO GLUES

In addition, our products have been designed to withstand the following: thermal and mechanical stresses, peel resistance, shock and humidity resistance. Cyano glues dry according to the humidity of the air, and will be fully effective after 24 hours of drying.

HOW TO STORE THEM?

The cyanoacrylate glue bottle should be kept closed during storage, out of direct sunlight and in a cool, dry place. Likewise, it must be protected from freezing. Cyano glues can generally be stored for 9 to 12 months.

HOW TO HANDLE THEM?

It is recommended that you have suitable equipment for the safe handling of cyanoacrylate adhesives: wiping equipment, thinners / solvents / solvents to dilute or remove traces of glue and protective gloves.

Depending on the product, the speed of curing and the strength of the assembly are proportional to the thickness of the adhesive layer and the materials to be assembled. It is possible to handle the glued objects after a few seconds and the final resistance to chemical and mechanical attacks is obtained in less than 12 hours. 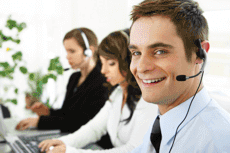 Do you have a question?
We can help!

*Not on public holidays 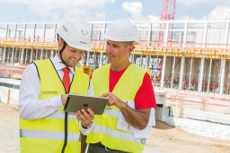 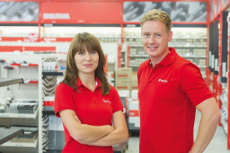 Würth is closer than ever, with trade stores opening across the country. Each store stocks around 4,000 products which are ready and waiting for you

Websites may store or retrieve information in the form of cookies in your browser. These may be anonymous statistical information, information about you, your preferences, or devices used to enable a personalized web experience or for the site to function as you expect it to.

We respect your right to the protection of your data. Therefore, you can decide not to accept certain types of cookies. An overview and the settings for the cookies we use can be found here. You can change these settings at any time when you visit our privacy policy.

Würth is allowed to personalize your web experience.

By saving, you confirm that you have understood the specified settings for cookies and agree to them.”